Boston: The Silicon Valley of longevity?

Two of my favorite quotes below, with a link to the full article.

Boston: the Silicon Valley of longevity?

An older population can serve as the hub for a new kind of innovation cluster.

“In the United States, the economic impact of older adults is already remarkable. Americans aged 50 and up account for just 35 percent of the US population, but, according to the AARP, they controlled 83 percent of all household wealth as of 2018, and were responsible for 56 cents of every dollar of consumer spending — a figure expected to rise to 61 cents by 2050. Their unpaid activities, including elder care, child care, and volunteerism, add another $745 billion worth of production to the US economy. Their labor force participation, too, continues to rise, part of a long-term trend that started in the 1980s.

But older people’s potential economic activity only begins with what they’re up to now. Tools to address their future needs, wants, goals, aspirations, and overall quality of life are either lacking or haven’t been imagined.”

“But older people are not purely consumers. The story of older employees, as well as older adults’ unpaid contributions to society, is one of catastrophic missed opportunity. Many industries are hemorrhaging intellectual capital as a result of waves of retirement, while in other industries, older workers have to fight both outright and implicit ageism for the right to contribute meaningful work. Traditional unemployment metrics, which don’t categorize retirees as unemployed, paper over the reality. In one nationwide survey, 40 percent of self-described retirees said they would rather have kept working if given the opportunity, and 30 percent said they would rejoin the workforce for the right job.”

Thank you authors Joe Coughlin and Luke Yoquinto for this valuable perspective.

Ageless Startup: Start an enterprise that represents your values, your goals, and your legacy. 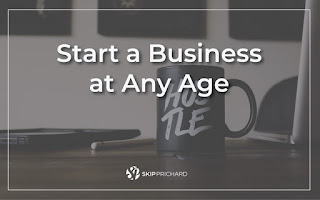 Ageless Startup  A great review of Ageless Startup by Skip Prichard.  Older workers are facing many hard choices as traditional employment options fade, and health concerns rise.  And yet, our knowledge and networks combine to make this a Renaissance age of entrepreneurship.  Rick Terrien is a lifelong entrepreneur and author of the book Ageless Startup: Start a Business at Any Age .   For people in the second half of life, there has never been a better time to start your own business.  The world needs you. Your community needs you. You have the time to make a difference, and you have the experience, resilience, and networks to make the world a better place.  Read the full review at Skips blog  Also be sure to check out Skip's great podcast - Aim Higher
Read more

I'm very grateful to be recognized as a VIP member of the Entrepreneur Leadership Network. The link below will take you to my new author biography. My Entrepreneur author-page: https://www.entrepreneur.com/author/rick-terrien
Read more

I had a great conversation with Bill Black, on Exit Coach Radio recently.   Here is a quote, summary and podcast link:  Rick - "There is a happy medium of small, one-person businesses that can contract their services, their knowledge and their networks.  You can approach this carefully and slowly, and at your own pace to set them up to match your own values." Rick Terrien, author of the new book  Ageless Startup: Start a Business at Any Age , describes how older workers can plan and launch small, independent businesses of their own to build more financial and personal resiliency into their lives QUESTIONS WE DISCUSSED • What are the biggest impediments older workers face when considering entrepreneurship? • What are the key steps to take for those considering entrepreneurship in the second half of life? • What is the key takeaway from your book? LISTEN TO THE FULL EXIT COACH INTERVIEW HERE
Read more